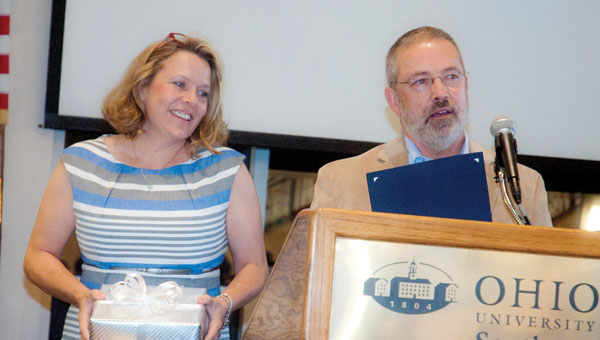 Honoring the community, its dedication to others and its work ethic were the focus of Lawrence County Chamber of Commerce’s Annual Awards Dinner at Ohio University Southern on Thursday night.

The event, held each fall, always recognizes a variety of individuals for their contributions to the county. First to be recognized this year were Bob and Sissy Clyse, longtime business owners, for their generosity and tireless service. Next was a surprise recognition of former OUS dean Dr. Bill Dingus, current executive director of the Lawrence Economic Development Corporation. Dingus was honored for the vision and determination he had to develop the Ironton branch of Ohio University.

“The Southern campus wouldn’t be in effect but for the efforts of one individual,” Dr. Nicole Pennington, current dean, said in her remarks before presenting the award. “It was his passion for education and his fight for a permanent facility in Ironton.”

Keynote speaker was Ohio Secretary of State Jon Husted, who got the most applause when he encouraged the audience to vote against Issue 3 providing for the legalization of marijuana.

Husted also detailed how he streamlined his office making it more efficient and more business friendly through technology including the Internet to enable businesses to start up.

“You can (set up) a business in 24 hours,” Husted said about his innovations. “Better customer service, we get more customers.”

Those changes also reduced staff by 25 percent through buyouts and attrition.

As chief election officer for the state Husted has worked to make it “easy to vote and hard to cheat.”

He has purged election roles of duplicate names and deceased voters.

“We did it with technology,” he said. “Technology changes the game. Democracy requires participation.”

He also detailed how the state’s economic future is dependent on education, praising the soon to open STEM school at The Point industrial park.

The 2015 Entrepreneur of the Year award went to Carlos Ortiz, who started Casa Grande restaurant in South Point.

Business of the Year went to Bimbo Bakeries USA, that recently opened a distribution center at The Point.

And another surprise was the 2015 George Patterson Community Servant award that went to Clorinda Hall.

Election Day is just around the corner and The Tribune has been hard at work putting our annual election guide... read more