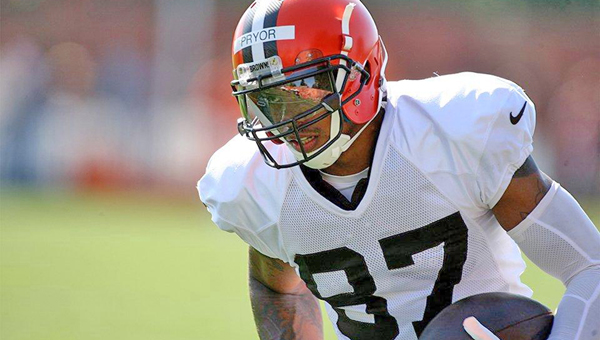 BEREA (AP) — Four days into Terrelle Pryor’s transition from a quarterback to wide receiver, he’s not only fitting in at Browns training camp, he’s standing out.

Pryor has already shown flashes of an impressive, albeit raw, skillset. He’s shown off both his speed and ball-handling skills, and even though he has a long way to go when it comes to mastering the intricacies of the position, it helps Pryor’s cause that the coaching staff isn’t just working from scratch.

“(Pryor) has really, really good ball skills,” Phillips said. “He has really strong hands, he’s able to pluck the ball. He’s got really natural ball skills. His hand placement is correct the majority of the time.”

It helps, too, that the 6-foot-4, 225-pound receiver simply towers above his teammates. Pryor has been using that size and strength to his advantage, especially when it comes to downfield blocking.

“He covers you up,” Phillips said. “It’s hard for defensive backs to see or work around him because he’s so big.”

The key now for the 26-year-old former Oakland quarterback will be to take advantage of those skills on every down he plays. Right now, there are times when he looks the part of a brand-new wide receiver.

Of course, there is so much more to the position than simply running and catching the ball. There is a laundry list of other things Pryor must learn on the fly, from the finer points of blocking to playing special teams. And there are still questions as to how Pryor will handle himself against something like press coverage.

These are the little things that will make the difference for Pryor as he continues to learn the position and fight for a roster spot. Perhaps the most impressive thing for Pryor so far, just two days into wearing full pads, is that he looks like he truly belongs.

“It’s too early to tell, but he does not look out of place,” head coach Mike Pettine said. “He does some good things. He’s just behind from a learning standpoint in the subtleties of playing receiver, but he’s ahead of where we thought he would be.”

Pryor’s teammates are noticing the progress and work ethic, too. Dwayne Bowe went so far to say last week that there was “no doubt” Pryor would make the final roster, and on Sunday, it was Browns receiver Taylor Gabriel’s turn to sing his praises.

“The transition from quarterback to wide receiver is crazy, man,” Gabriel said. “(Pryor) has good hands, good routes. He’s a freak athlete. God blessed him with height, speed and all the attributes.”

Of course, Pryor isn’t just a feel-good project for the Browns. Having the natural skills is great, but if he’s going to make the team, Pryor will need to show marked improvement in the little things. But he seems evident in the drills he’s been running that he has the talent.

“Talent wins ballgames,” Phillips said. “All we want is a guy that can help us win games here. That’s the main goal.”

NOTES: The Browns’ defense debuted orange-and-brown camouflage jerseys Sunday after winning the competition against the offense on Saturday. The offense won the next round at the end of Sunday’s practice. . DL Billy Winn, who left Saturday’s practice, has been diagnosed with an ankle sprain and will be re-evaluated on a weekly basis. . Three Browns running backs were on the bike Sunday, including rookie Duke Johnson (hamstring), Terrance West (calf) and Glenn Winston (knee).