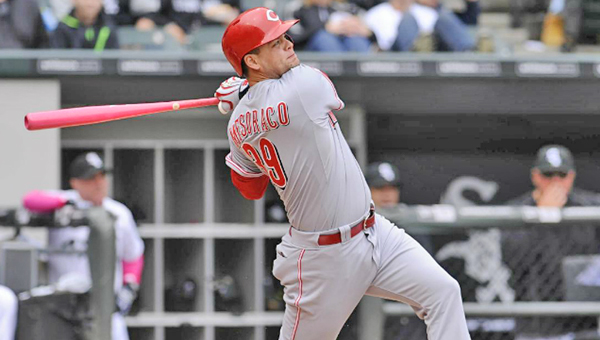 Cincinnati’s Devin Mesoraco slams an RBI triple during Sunday’s game against the Chicago White Sox. The Reds lost 4-3 in the bottom of the ninth inning. (Photo Courtesy of The Cincinnati Reds)

CHICAGO (AP) — Aroldis Chapman had been nearly perfect this season. The White Sox found a way to get to the Cincinnati Reds closer.

Gordon Beckham hit a game-winning single against Chapman in the ninth as the Chicago White Sox beat the Cincinnati Reds 4-3 on Sunday.

It was Chapman’s first earned run of the season in 12 2-3 innings.Chapman (1-1) got the first two outs of the inning, then gave up back-to-back singles to Avisal Garcia and Alexei Ramirez. They advanced to second and third on a wild pitch, then on a 2-2 100 mph fastball Beckham singled to right-center to end the game, breaking the tie.

“No you don’t. You don’t. He did prove he’s human. He’s been phenomenal this year,” said Reds manager Bryan Price.

Beckham said he had a different mindset at the plate when he faced Chapman.

“For me it did. I wasn’t trying to do too much. I was just trying to really just put the barrel of the bat on the ball because you can’t really wait around with a guy like that. Just try to hit it and hopefully it finds some grass,” said Beckham.

Chapman thought he made a quality pitch to Beckham.

“It was a high pitch, but I think it was a great pitch. To me it was a really good pitch. He was actually behind, but he made contact,” said Chapman through a translator.

White Sox closer David Robertson (3-0) couldn’t hold a 3-1 lead in the ninth. He gave up back-to-back singles to start the inning to Devin Mesoraco and Bryan Pena. After a pass ball by Geovany Soto to advance the runners to second and third Zack Cozart doubled down the left-field line to tie the game. It was Robertson’s first blown save of the season in six chances.

“We had no business being in that game. It’s 3-1 in the ninth and one of the better closers in the game in there,” said Price.

Robertson had a 12-inning scoreless streak before the ninth.

“It’s weird. I don’t know if I was on deck or walking up to the plate or what, but I saw where he had a little scoreless streak going. They happened to have that up on the board. I know he’s a good closer. I didn’t know he was pitching that well,” said Cozart.

Danks had his best start of the season. He allowed one run on six hits with four strikeouts, while pitching around three walks in the no-decision. It was his longest outing of the season.

“We’ve been trying to do certain things just to give me a better chance. Messing up timing’s one of them. I think it’s very effective. We’re going to continue to work on things but it’s basically doing whatever you gotta do to get that guy out and fortunately it worked, said Danks.

The White Sox won two of three games in the interleague series against the Reds, and rebounded from an 0-5 road trip by finishing the homestand with a 4-2 record.

In his third career start, Michael Lorenzen pitched five innings and scattered seven hits while allowing one run in the no-decision.

Reds: Mike Leake (2-1) is scheduled to make his seventh start of the season against the Braves on Monday. Opponents are hitting .182 against the right-hander. Leake has a 16 inning scoreless streak.

White Sox: Jeff Samardzija (2-2) concludes his five-game suspension on Sunday for his actions in a brawl against the Royals. He is scheduled to start against the Brewers on Monday.

White Sox: Hector Noesi, who exited his start in the second inning of Saturday’s loss to the Reds after getting in hit in the right hip by a line drive, is day-to-day. White Sox manager Robin Ventura didn’t rule out Noesi being available out of the bullpen on Sunday if needed.

Reds leadoff hitter Billy Hamilton was 7 for 40 during the 10-game road trip. He was 0 for 5 with three strikeouts on Sunday.

BACK ON THE ROAD

After a three-game interleague series in Milwaukee, Chicago travels to Oakland to cap off a seven-day road trip. The White Sox are 2-11 on the road.