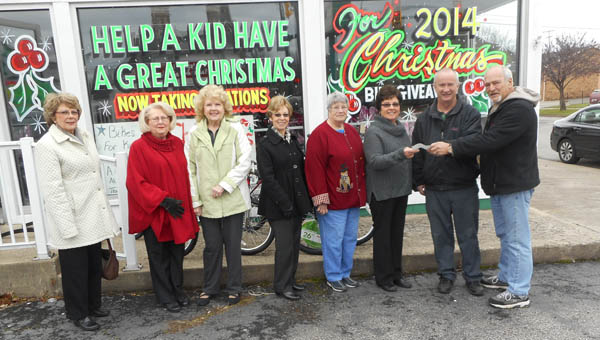 The Tribune/Brandon Roberts
The Child Welfare Club presents a check for $265 to co-organizers of the Lawrence County Bicycle Giveaway John Dickess, second from right, and Don Schwartz, far right. The money will be used to buy bikes for the giveaway on Saturday. Pictured, from left, are Child Welfare Club members Janice Haeberlin, Jane Morris, Mary Laber, Sandy Cloran, Madolin Blackwell and Nancy Corn.

When John Dickess and Don Schwartz, co-organizers of the Lawrence County Bike Giveaway, began raising money for this year’s event this past September, the goal was giving away 350 bikes. This past Wednesday the number of bikes was at 325.

That number would soon go up, however, after the Child Welfare Club donated $265 toward the purchase of bikes.

“There’s a family with five kids who all signed up for bikes,” Dickess said. “This money will buy bikes for all of them.”

Dickess and Schwartz said bikes would be purchased until the day of the giveaway, which is at 4 p.m. Saturday in the Ironton High School auditorium.

“The main problem we have right now,” Schwartz said, “Walmart is running low on bikes.”

“I think this is great,” Nancy Corn said. “I’m glad (the Child Welfare Club) could be a part of it.”

Dickess said some local children donated their birthday money to buy bikes and those children on Saturday will give away the bikes bought with their money.

Families that will receive a bike were notified by a phone call.

“Signing up does not guarantee a bike,” Dickess said. “Only families that received a phone call will get a bike on Saturday.”

Members of the REACH ministry perform a Christmas program at Ironton First Church of the Nazarene. Ellis walked off stage... read more