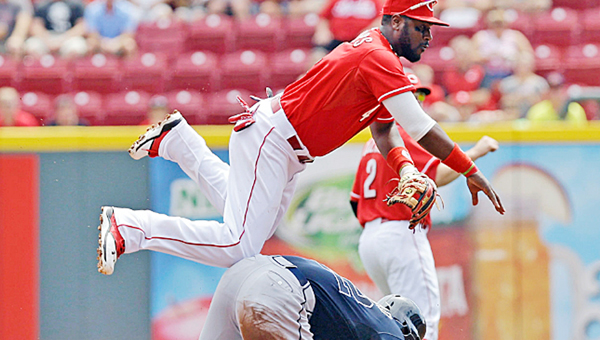 Cincinnati Reds’ second baseman Brandon Phillips gets the force out at second base despite a sliding Jason Heyward during the first inning of Sunday’s game. The Reds won 5-3. (Photo Courtesy of the Cincinnati Reds.com)

CINCINNATI (AP) — It was a long time coming, but Alfredo Simon got his first win of the second half

Simon pitched seven strong innings to earn his first win in eight starts since the All-Star break and Todd Frazier homered as the Cincinnati Reds held on for a 5-3 win over the Atlanta Braves on Sunday.

Simon (13-8), who was 0-5 since pitching in the All-Star Game, opened with six shutout innings before yielding a run in the seventh. He allowed five hits with one walk and six strikeouts over seven innings.

“Simon was ahead in the count and was able to use his whole complement of pitches,” Reds’ manager Bryan Price said. “There are times when a pitcher is throwing with the same velocity but it doesn’t feel like it. He tries to manufacture more. Today, he just executed his pitches.”

Simon decided that location was more important and made the adjustment.

“I knew I had to keep the ball down and that was big for me,” Simon said.

Manny Parra and Jumbo Diaz pitched the eighth. Logan Ondrusek allowed Evan Gattis’s 20th homer leading off the ninth and Jonathan Broxton gave up Jason Heyward’s RBI single before coaxing Justin Upton into grounding into a base-loaded forceout for his seventh save for the Reds, who salvaged a split of the four-game series after dropping the first two games.

The Reds have won back-to-back games for the first time since winning three straight against Cleveland August 5-7. The Braves hadn’t lost two straight games since Aug. 11-12 against the Dodgers.

The Reds strung together five hits — as many as they totaled in their 1-0 win on Saturday — and scored three runs — one more than their combined total in their previous three games — to break up a scoreless tie in the fourth. After Ryan Ludwick came up with a bases-loaded sacrifice fly, Brayan Pena and Zack Cozart added RBI singles while sending Aaron Harang to his first loss in four career starts against his former team.

Jay Bruce’s single in the inning was a ground ball that Freddie Freeman fielded but firstbase was not covered.

“Something as small as covering first base, which I’ve done thousands of times in my career,” Harang said. “The one time I don’t do it, the inning unravels. If I cover first, the next guy flies out to right field and the inning’s over.”

Braves: After Atlanta’s day off on Monday, LHP Alex Wood makes his second start of the season against the Mets in the opener of a three-game series at New York.

Reds: After Cincinnati’s day off on Monday, RHP Johnny Cueto starts against the Cubs on Tuesday trying to get back on track after seeing a personal seven-game winning streak snapped at St. Louis on Wednesday.

Braves: SS Andrelton Simmons didn’t start on Sunday as manager Fredi Gonzalez kept his promise to give a regular the day off, which will mean two days of rest for Simmons with Monday’s break in the schedule.

Reds: RHP Homer Bailey, on the disabled list since August 16 with a strained right forearm, has increased his exercise program, but he has not resumed throwing, manager Bryan Price said. “There’s been improvement from where he was,” Price said.

The Reds had five hits in the fourth inning off Aaron Harang. The Reds has a total of 12 hits in the first three games of the series and no more than five in any of them.

Since leaving the Reds following the 2010 season, Aaron Harang made three starts against the Reds with three different teams and had a 2-0 record. Harang is one of four active pitchers to win 10 or more games with four different teams.

Gattis’s home run in the ninth bounced off the top of the wall.