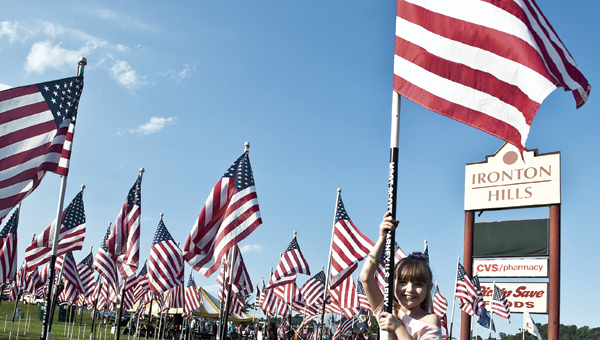 THE TRIBUNE/JESSICA ST JAMES
Seven-year-old Sydney Henry helps set up flags, branded with the names of fallen soldiers and first responders from Ohio, during the Flags of Honor ceremony Thursday at the Ironton Hills Plaza.

It isn’t Sturgis, but it was certainly born out of that same spirit 10 years ago. Even one of this year’s headline performers is a band called Jackyl, a group that is synonymous with Sturgis and frequently appears on TruTV’s “Full Throttle Saloon” filmed in the famed South Dakota biker town.

For all that wild, free-spirited fun for which the Rally is known, it always begins with silence.

Each year Gino Zimmer brings Ohio’s moving fallen soldiers memorial to Ironton during Rally weekend and each year members of the Ironton community along with the biker community come out to honor those lost in combat during the Flags of Honor ceremony.

This year more than 80 flags bearing the name of veterans killed in action were placed in the grassy field adjacent to the Ironton Hills Plaza. A moment of silence for those who gave their lives fighting for American freedom was held prior to guest speaker Navy veteran and Ironton native Paul Woods taking the podium.

“We must never forget the sacrifices these men and women have made,” Woods said. “But, we must also honor the family and friends bereft by their loss. The fatherless children, the wives who are left to cope, childless parents, best friends and neighbors left with an empty spot in their lives.”

Woods also discussed how each of the men and women honored at the ceremony were serving not because they were forced to, but because they chose to.

“These fallen heroes were all volunteers,” he said. “They stepped forward knowing full well the hazard they would face, that is the ultimate definition of bravery.”

This year the Flags of Honor ceremony also reached outside military service to honor fallen first responders in Lawrence County. Speaking on behalf of firefighters, EMS workers and law enforcement, Sheriff Jeff Lawless said it was a humbling experience.

“I’m humbled here tonight,” he said addressing the crowd. “To stand here and honor the men and women these flags represent. They paid the ultimate price so you and I can continue to live free in what is still the greatest country on earth.”

An Ironton man who pleaded insanity after vandalizing the city center was declared incompetent to stand trial. A mental evaluation... read more