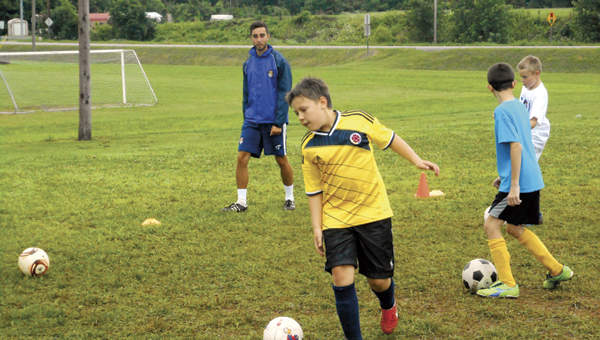 The Tribune/Justin Prince
Coach Matt Wirnes looks on as players participate in a drill at the annual Challenger Sports Soccer Camp.

The Challenger Sports Soccer camp is in full swing on the eastern end of Lawrence County this week.

The camp, which features coaches from England who come to the United States and stay with a host families, has the goal of making the world’s most popular game more popular in America.

“We want to teach the game,” Sam Wirnes, a coach at the camp said. “Hopefully, through teaching it we can help the sport grow here in the states.”

The five-day camp dedicates each day to teaching a specific skill and culminates on Friday with a miniature World Cup tournament.

“The whole thing is skill specific,” Wirnes said. “We want to be able to break these skills down and teach them individually. On Friday, the last day we are going to have a World Cup style tournament and we have already assigned the kids countries. Obviously, with this being a cup year we are capitalizing on its appeal.”

“We try to incorporate some educational things into it,” Wirnes said. “Teaching them some fun facts about their countries just gets them more into representing that country in our tournament. Obviously, with our backgrounds there is a little bit of a culture swap going on as well.”

Those cultural differences were evident when Wirnes had to correct himself on the name of the sport.

“There we go now we’re playing futbol,” Wirnes told the players as they went through a drill. “Sorry, I mean soccer, we’re playing soccer.”

Four years after opening, the skate park on Etna Street in Ironton will have its official dedication on Saturday. From... read more