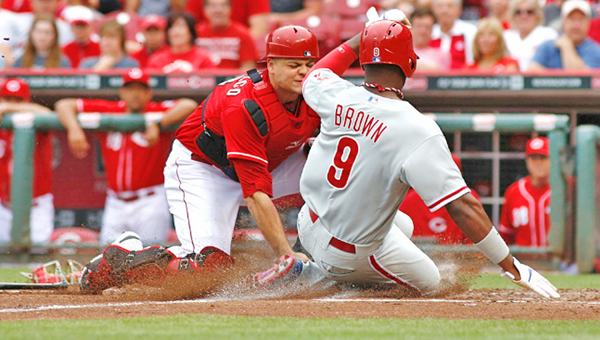 Cincinnati Reds’ catcher Devin Mesoraco (left) tags out Domonic Brown (9) at home in the fourth inning of Sunday’s game. The Reds beat the Philadelphia Phillies 4-1. (Courtesy of The Cincinnati Reds.com)

CINCINNATI (AP) — Homer Bailey finally beat the Philadelphia Phillies — and he has nobody but himself to thank.

Bailey pitched eight effective innings and drove in the go-ahead runs as the Cincinnati Reds came from behind for a 4-1 win over the Philadelphia Phillies on Sunday.

“The bullpen has picked me up so much this year that the big thing I wanted to do today was give them a day off,” he said.

Manager Bryan Price was happy to see his starter rewarded.

“What an effort,” Price said. “What impressed me most was he went out in the eighth with 108 pitches against the middle of their lineup. He wanted to be the guy. He was all in. He did what we needed him to do. He tastes the finish line. There’s something in that. Certainly, his two-run single was big.”

Billy Hamilton added a two-run homer for the Reds, who won their second straight against the reeling Phillies after a three-game losing streak.

Bailey (7-3) allowed just six hits and one run with three walks and seven strikeouts while matching his season high in innings and picking up his first career win in five decisions over 10 games against Philadelphia. He threw a season-high 121 pitches, four short of tying his career high.

The Phillies had at least one runner on base in six of those innings, but they couldn’t capitalize enough to avoid their eighth loss in nine games. Manager Ryne Sandberg blamed a lack of “execution and focus.”

“I see potential now and then, but we need to be consistent,” the first-year manager said. “It’s all about chipping in and doing something every day.”

Aroldis Chapman struck out the side in the ninth for his ninth save.

Rookie right-hander David Buchanan (1-3), making his fourth career start since being called up by Philadelphia on May 24, allowed six hits and four runs with six strikeouts in six innings. He also hit a batter while losing his third consecutive start.

Trailing 1-0 in the fifth, Todd Frazier led off with a bloop single to center field and went to third on Zack Cozart’s opposite-field double down the right-field line. Against a drawn-in Phillies infield, Bailey grounded a two-run single up the middle, just out of reach of diving shortstop Jimmy Rollins.

“I think a starting pitcher should at least be able to handle a bat,” Bailey said. “At least put the ball in play — get a fly ball or a seeing-eye single.”

Hamilton, hitless in his previous 12 at bats, followed with his second home run of the season, a 348-foot drive into the right-field seats on what he said was a full-count changeup. He wasn’t sure it was going out.

“I don’t hit home runs,” he pointed out. “Didn’t you see me running? I was rolling. I looked up and Homer was right there.”

Buchanan wouldn’t change either one of the pitches, he said.

“I got the ground ball I wanted,” he said about Bailey’s hit. “I left the changeup (to Hamilton) up. If it’s down and away, he doesn’t hit it. I had conviction with that pitch. It was the right pitch.”

Philadelphia took a 1-0 lead in the third. Ben Revere and Jimmy Rollins singled with one out. Revere stole third and scored on Chase Utley’s sacrifice fly.

The Phillies, who saw two innings end with runners thrown out at the plate on Saturday, lost another runner at home in the fourth inning on Sunday. Domonic Brown was on third base with Carlos Ruiz on first and one out when Cesar Hernandez hit a chopper to third baseman Todd Frazier, who easily threw out Brown at the plate. Buchanan followed with an inning-ending fielder’s-choice grounder.

Notes: Jimmy Rollins needs five hits to pass Hall of Famer Mike Schmidt for the Phillies’ career record after going 1-for-3 on Sunday. … Cincinnati’s Devin Mesoraco struck out three times while extending his career-long hitless streak to 17 at bats. … Philadelphia wrapped up a stretch of 20 games in 20 days with a 6-14 record. After a day off on Monday, the Phillies open a stretch of 21 games in 20 days with the first of a three-game home series against San Diego. … The Reds are scheduled to continue their 10-game home stand, their second-longest of the season, on Monday with the first of four games against the Dodgers.

Heat edges Spurs to even series 1-1

SAN ANTONIO (AP) — No cramps, no problems for LeBron James. And with their superstar making it to the finish... read more