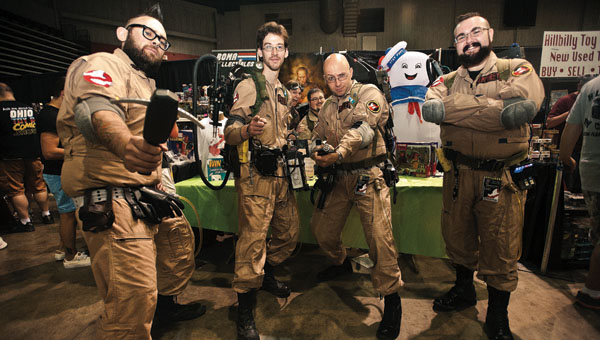 The Ghostbusters make an appearance during the Tri-State Comic Con Saturday at the Big Sandy Superstore Arena Saturday in Huntington, W.Va.

For one afternoon downtown Huntington might as well have been Metropolis, and the arena could have been mistaken for the Hall of Justice.

Over the past decade dozens of the most popular comic book characters have come to life in cinemas across the world, as the superhero genre has exploded in popularity.

On Saturday those same heroes and many lesser known characters came to life at the Tri-State Comic Con, or TriCon, at the Big Sandy Superstore Arena in Huntington, W.Va.

The event, which started three years ago, has grown into the largest comic book convention in West Virginia and attracts some of the industry’s biggest names to the area.

“I came the first year they ever had it,” Joe Robertson, of Ft. Gay, W.Va., said. “It wasn’t near as big of a deal as it is now. To see it grow into this many people and to see some of the people who are coming to it now is pretty amazing.”

Among the celebrities and industry professionals at this year’s TriCon were writer and Huntington native Beau Smith, who has worked for both D.C. and Marvel Comics; artist Matt Slay, who is known for his work on Batman and the Teenage Mutant Ninja Turtles; and former WWE Heavyweight Champion and New York Times best selling author Mick Foley.

Foley was a fan favorite at the event, as a long line of autograph seekers snaked their way to his booth.

“I remember watching him wrestle when I was a kid,” Robertson said. “He had so many different characters and would put his body through some crazy stuff. Some of the things he was willing to go through made you think he was stupid. But, talking to him and reading his book, he’s a really intelligent person.”

Also at the event were several vendors selling comics, toys and other collectable items. Slay had a booth set up selling some of his exclusive sketches and drawings.

“This one here was drawn exclusively for Sean Astin,” Slay said, pointing to a drawing of Raphael from the ninja turtles comics. “He’s voicing Raph in the new ninja turtle cartoon and he asked me to draw him something that captured the character.”

During the event, several of the industry professionals would take the podium to answer questions about their work and comic books in general from the fans. But, in many ways it was the fans themselves that were the stars. Many came dressed in elaborate costumes depicting their favorite characters, stopping to talk and pose for pictures with the convention-goers.

“That’s the coolest thing,” 10-year-old Jake Laugherty said, after snapping a picture with X-Men character Wolverine. “I’ve got to meet so many of my favorite heroes. I hope I get to come back every year.”

The creativity that goes into the costumes is one of the things that make them stand out to others attending TriCon. Prizes were also awarded to those with the best costumes, but according to Brittany Thacker, who came dressed as Wonder Woman, it isn’t about the prizes as much as it’s about getting to be someone else.

“It’s awesome,” Thacker said. “You have your Batmans, your Spider-Mans and the popular bad guys like the Joker and Deadpool. But, you also have some characters from smaller more obscure stuff. Seeing how people bring them to life is cool. That’s what it’s about, being able to step outside yourself and be someone else for a little while.”

Flying into the future