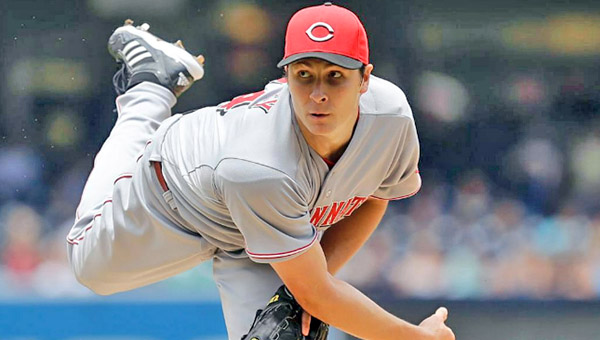 BOSTON (AP) — The Cincinnati Reds rallied to force extra innings, but could not complete the comeback at Boston.

Grady Sizemore’s hit off the wall in left drove in the winning run as the Red Sox held off the Reds 4-3 in 12 innings on Tuesday night.

Homer Bailey pitched six solid innings for Cincinnati, but the Reds gave him just one run of support before scoring twice in the eighth tie the game at 3-all.

“We finally got something going a little late,” said Ryan Ludwick, whose sacrifice fly in the eighth drove in the tying run. “Any time you lose a game, you think about missed opportunities.”

There were plenty for both teams until Sizemore ended the game in the 12th with runners on first and second with nobody out. Sizemore hit a line drive off Logan Ondrusek (0-2) to the base of the Green Monster to drive in David Ortiz with the winning run.

The ball bounced off the wall between Ludwick and center fielder Skip Shumaker, who had no chance to field it in time to get even Ortiz as he lumbered home from second.

“It will never get old to walk off,” said Sizemore, who had three hits in the game. “I was just glad I could come through.”

An All-Star with the Cleveland Indians, Sizemore missed all of the last two seasons while recovering from back surgery. The Red Sox brought him in as an extra outfielder, knowing the low risk would pay off big if he returned to the form that earned him MVP votes from 2005-08.

“I’ve got to believe that tonight gives him even further feeling like he’s contributing here rather than being someone coming back from an injury,” Red Sox manager John Farrell said. “Nights like tonight go a long way and continue to rebuild Grady.”

It was the longest game between the two teams since the Red Sox won Game 6 of the 1975 World Series on Carlton Fisk’s 12th-inning homer.

Craig Breslow (1-0) pitched one inning of scoreless relief for the win.

Ondrusek pitched a scoreless 11th but gave up singles to Ortiz and Mike Napoli.

Dustin Pedroia had three hits, including two doubles, and Sizemore also had three hits for the Red Sox, who won for the third time in four games. Napoli drove in a pair of runs as the Red Sox opened a 3-1 lead only to see Junichi Tazawa give it up in the eighth.

Cincinnati beat the Red Sox in the ‘75 Series in seven games despite Fisk’s homer in Game 6. The teams also met for interleague series in 2005 and ‘08.

Red Sox starter Felix Doubront allowed one run on five hits, but he walked two batters in the sixth before leaving with one out and a 3-1 lead. Burke Badenhop threw one pitch to Schumaker to get an inning-ending play.

It was still 3-1 in the eighth when Joey Votto drew a one-out walk and Brandon Phillips doubled to put runners on second and third. Todd Frazier singled in one run, and Ludwick tied it 3-all with a sacrifice fly.

NOTES: The Reds placed RF Jay Bruce on the 15-day disabled list with a torn meniscus in his left knee and selected the contract of OF Roger Bernadina from Triple-A Louisville. Bruce had arthroscopic surgery on Monday and is expected to miss about a month. … The game marked the 99th anniversary of Babe Ruth’s first of 714 career homers, on May 6, 1915. The Red Sox LHP also pitched 12 1-3 innings and took the loss in a complete game against the Yankees at the Polo Grounds. … The Reds announced that their April 28 rainout against the Cubs will be made up as part of a day-night doubleheader on July 8. … Red Sox DH David Ortiz played in his 2,000th career game.

Jim Walker jim.walker@irontontribune.com   COAL GROVE — Jesse Rigsby mixed it up and his defense ate it up. Rigsby pitched... read more