Hundreds show up for job fair 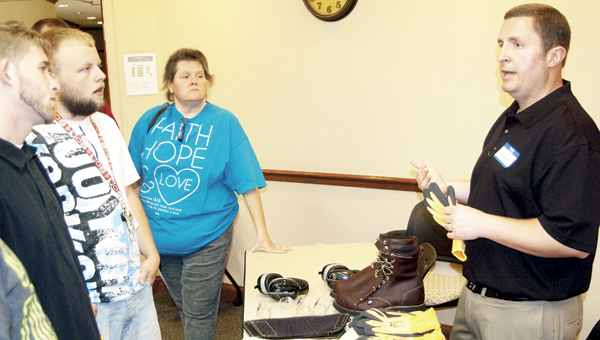 SOUTH POINT — Nearly a hundred people were at the Greater Lawrence County Area Chamber of Commerce for a job fair hosted by Orica, and that was before the doors even opened at 9 a.m.

By 11:15 a.m., Tilly Kelley, human resources adviser for Orica, said more than 125 people had already completed and turned in applications.

Operations from three different plants were combined creating 60 new jobs at Orica’s steel accessories factory at The Point industrial park in South Point. The company is a provider of commercial explosives and blasting systems to the mining and infrastructure markets.

Jerry Shapaka, plant manager at the South Point factory, spoke to applicants in groups as part of the application process.

“I’m just telling everyone a little bit about how this company operates and about our philosophy,” Shapaka said. “I think the path to failure is the lack of communication. Putting up barriers doesn’t promote the right thing.”

Tony Agosto, a 55-year-old Chicago native who moved to South Point three years ago, was eager to apply at Orica.

“In Chicago I worked in the mortgage business and we all know what happened there,” he said. “I have been out of work for a month and before that I worked in call centers and fast food. That seems to be all I can find around here.”

Dr. Bill Dingus, executive director of the chamber, was pleased with the turnout for the fair.

“If I were an employer, I would be delighted with the turnout here today,” he said. “Half of the people who have walked through here today look like they would be an asset to any company. This shows that people have a good positive attitude and are wanting to work.”

Dingus added that Orica is a great company to work for and believes the company fits nicely into the business community.

“Having numerous smaller companies is much better for the community than one giant company,” Dingus said. “If you have one giant company, when it goes under, everyone suffers. With a number of medium-sized companies, if one shuts down, moves or gets bought out, at least people have other options.”

For those interested in applying but were unable to attend, they can apply online at www.orica.com/southpoint.

$1M in bonds could be issued

If borrowing more than $1 million could mean savings long-term for the county plus financing a wish list of upgrades,... read more