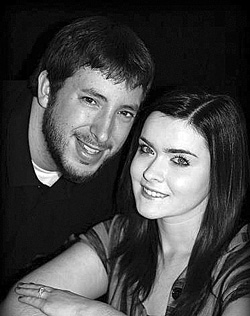 Cheryl and Allen Jenkins, of Kitts Hill, and Bill and Robin Reynolds, of Deering, announce the engagement and forthcoming marriage of their children, Heather Jenkins and Zack Reynolds.

The bride-to-be is the granddaughter of Janice and James Wilson, of Ironton, and Mart and the late Theda Jenkins, of Kitts Hill. She is a 2006 graduate of Rock Hill High School and is majoring in nursing at Collins Career Center.

The groom-elect is the grandson of Dorothy and Bob Hanshaw, of Deering, and Janet and Emerson Reynolds, of Gallipolis. He is a 2006 graduate of Dawson-Bryant High School and is employed at the Giovanni’s Warehouse in Ashland, Ky.

Katelyn, Luke, and Clay Ferguson, and Austin, Brittany, Courtney and Cameron Hammonds annouce the engagement and forthcoming marriage of their... read more