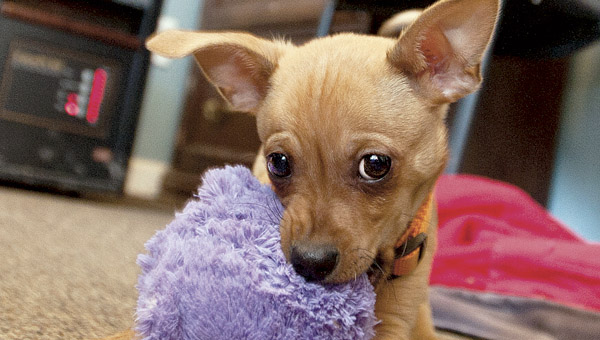 Eight-week-old Tango, a dachshund/Chihuahua mix, is content playing with his chew toy. Tango was rescued by Good Samaritans after being tossed from a moving vehicle Monday.

CHESAPEAKE — Little Tango has made himself right at home with the folks at Now Service Pro in Chesapeake.

The 8-week-old Chihuahua/dachshund mix bounded around the office Thursday, chewing on small pieces of cardboard and a new favorite squeaky toy, stopping for a drink of water and a short rest on an old coat on the floor.

Debbie Kelly, who works in the office, said Tango only seems afraid when riding in a car. Just a few days prior, the puppy was tossed out of a moving vehicle on U.S. 52, like a piece of litter.

And that’s what witness Chris Hutchinson thought at first, he said, that the little pup rolling across the highway was trash.

It was when he saw the orange collar around its neck that he knew what had just happened.

“It kind of shocked me,” Hutchinson said. “I pulled over and that’s when the car sped off and headed towards Ashland.”

Hutchinson, 47, of Chesapeake and owner of Now Service Pro, called 911 and followed the vehicle to take a photo of the license plate. He also called Kelly and told her what had happened.

Kelly said she searched for hours along the side of the road for any sign of the animal.

Luckily, two Marshall University students had rescued the dog from the highway and left their contact information with a nearby business.

“I was just shocked,” Kelly said. “Who would do that?”

Phillips was charged with cruelty to animals, a second-degree misdemeanor, and was arraigned today in Lawrence County Municipal Court.

Arrested Thursday was Jennifer Edmonds, 37, of Dayton. She was also charged with animal cruelty and falsification for lying to deputies. She also had a warrant out of Kentucky.

Hutchinson said he heard Phillips had claimed the dog jumped out of the car, but didn’t buy that excuse.

“The dog definitely, 100 percent, did not jump out of that car,” Hutchinson said. “I saw it with my two eyes. … If one of my animals would have jumped out, I’d been blocking the highway with my truck.”

When Hutchinson got in contact with the Marshall students, the man said he didn’t think twice about adopting the dog.

“It’s so sweet,” he said of Tango. “There is not a mean bone in its body. I just don’t understand why somebody would do that.”

Now the dog is somewhat of a mascot at the Now Service Pro office.

Kelly and Hutchinson have taken turns taking Tango home in the evenings, but the dog spends its days in the office. Hutchinson said the puppy will choose whom he belongs to, and that it has taken a liking to Kelly.

“He’ll have a good life. He’ll be treated well and he’ll be loved to the day he dies,” Hutchinson said. “That’s the only thing I know for a fact that I can promise.”

Two Pedro men are facing a total of 30 charges each following an almost 10-month investigation by the Lawrence County... read more