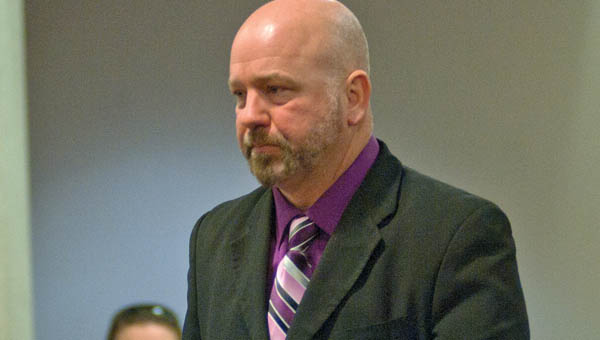 Hanging Rock Mayor Chris Davidson appears before Judge O. Clark Collins in Ironton Municipal Court Thursday as the charges of driving under the influence were reduced.

The DUI case against Hanging Rock Mayor Christopher Davidson was concluded Thursday in Ironton Municipal Court after charges were lowered by the prosecutor’s office, citing lack of evidence.

Assistant Prosecuting Attorney Bob Anderson recommended the DUI charge to be lowered to physical control, saying there was no evidence Davidson was operating his vehicle at the time he was questioned by authorities in mid-December.

“We are not able to prove that beyond a reasonable doubt,” Anderson said. “He was found sitting in the vehicle. The keys were not even in the ignition.”

According to Ohio Revised Code, “physical control” means being in the driver’s position of the front seat of a vehicle and having possession of the vehicle’s ignition key or other ignition device.

Davidson, who retained attorney Mark McCown to represent him, pleaded guilty to the reduced charge.

Judge O. Clark Collins sentenced Davidson to 10 days in the county jail, suspended, one year of probation and a $350 fine plus court costs.

McCown said after the case concluded that he felt, following motion hearings, he could have gotten even the physical control charge dropped, but said Davidson wanted to take responsibility for his actions.

“He understands it was a technical violation of Ohio law,” McCown said.

McCown also said the sentence imposed was the standard for a physical control violation.

The charges came about after the Ohio State Highway Patrol and an Ironton Police officer responded to what OSHP termed a “suspicious vehicle” parked on Mimosa Lane in the north end of Ironton.

According to a report by OSHP, Trooper C.T. Canter noticed “an odor of an alcoholic beverage on and about (Davidson’s) breath and person.”

The report also stated Davidson was placed under arrest for “physical control,” but was later charged with a DUI.

First half tax bills sent out

Bills are in the mail and collections are open for the county’s first half tax bill. Lawrence County Treasurer Stephen... read more