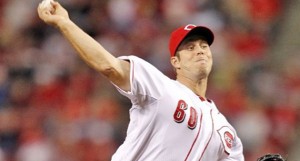 Cincinnati reliever J.J. Hoover pitched the ninth inning for his first career save as the Reds beat the Pittsburgh Pirates 2-1. (Courtesy of the Cincinnati Reds)

Homer Bailey pitched seven solid innings and Cincinnati came up with just enough offense to squeeze out a 2-1 win for a three-game sweep of the Pirates.

“I felt like it was a battle all night,” Bailey said.

Cincinnati’s win and the Cardinals’ 3-2 loss at San Diego cut to eight the Reds’ magic number for clinching the division. Any combination of Reds wins and Cardinals losses adding up to eight clinches the title for Cincinnati.

Bailey (11-9) allowed six hits and one run with two walks and four strikeouts to extend his career high in victories.

Sam LeCure pitched a perfect eighth and rookie J.J. Hoover allowed a two-out hit before striking out pinch-hitter Jose Tabata to complete his first career save.

“It was awesome,” said Hoover, one of the relievers filling in as closer while Aroldis Chapman deals with a tired shoulder. “It was a good adrenaline rush.”

Hoover is a Pittsburgh-area native, but he didn’t attach any extra significance to reaching the milestone against his hometown team.

“It was a well-pitched game on Homer’s side,” Burnett said. “You have to tip your hat.”

The Reds cashed in a bit of good fortune to take a 1-0 lead in the third inning. Ryan Hanigan led off with a lined single to center field and moved to second one out later on Brandon Phillips’ bouncer up the middle. Both runners moved up on Burnett’s wild pitch, and Hanigan scored on Wilson Valdez’s chopper to second.

Baker was impressed with some execution from his team that he wasn’t seeing earlier in the season.

“You’ve got to do those things if you’re going to win close ballgames,” he said. “(The Pirates) were doing it earlier this season. It’s nice to get the sweep and get one step closer.”

The Pirates tied it in the fourth on singles by Andrew McCutchen, Garrett Jones and Gaby Sanchez to lead off the inning before leaving the bases loaded when Bailey struck out Burnett.

They missed another scoring opportunity in the sixth when Alex Presley tripled down the right-field line with one out and was caught stealing home when Clint Barmes couldn’t get his bat on a suicide squeeze attempt. Baker and bench coach Chris Speier smelled it and ordered a pitchout, which also turned into a disaster when Bailey’s foot slipped on the mound and the high-and-away pitch suddenly was low-and-away, but Ryan Hanigan still caught it in time to block the plate.

“All the credit goes to Dusty and Speier,” Bailey said. “Hanigan did a great job. He ended up with chalk and dirt all over his face.”

Barmes did what he could to get his bat on the pitch.

“It looked like it may have been way outside,” he said. “I still almost got a piece of it.”

Those are the kinds of plays that haven’t gone the Pirates’ way during their now season-worst six-game losing streak, which has left manager Clint Hurdle willing to look anywhere for a spark

“We tried to scratch out a run,” Hurdle said. “It was a good call by them.”

Notes: 3B Pedro Alvarez was scratched from Pittsburgh’s original starting lineup less than an hour before the first pitch with what a spokesman called “right wrist discomfort.” There was no definitive word before the game on when Alvarez suffered the injury or how long he might be out. … 2B Neil Walker took batting practice Tuesday, but he still missed his 15th straight game with lower back tightness on Wednesday. He had no baseball-related activities planned for Wednesday or Thursday, manager Clint Hurdle said. “We’ll see how he is on Friday,” Hurdle said. … Thursday’s day off is the last on Pittsburgh’s schedule. The Pirates are scheduled to finish with 20 games in 20 days.