Hanigan, Paul clutch up in 9th 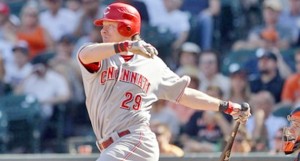 Cincinnati catcher Ryan Hanigan had a walk-off RBI hit in the ninth inning that gave the Reds a 5-4 win over the Chicago Cubs on Sunday. (Photo Courtesy of the Cincinnati Reds)

CINCINNATI (AP) — Xavier Paul kept the Cincinnati Reds winning in spite of themselves.

Paul led off the ninth inning with a pinch-hit triple and Ryan Hanigan followed with a single Sunday as Cincinnati overcame three more errors to pull out a 5-4 win over the Chicago Cubs.

Paul lined the first pitch from Shawn Camp (3-6) over first base into the right-field corner. Hanigan hit the next pitch to left-center over the drawn-in Chicago outfield.

“I knew the ball was down the line and I had a chance for three,” Paul said. “I was trying to bust it out of the box. There’s a big difference between being on third with nobody out and being on second with no outs. On the first pitch, I was looking for a pitch I could drive. I went out with the mindset that, if I got a pitch I could handle, I was hacking. I got it, and luckily, I got a good swing on it.”

Aroldis Chapman (5-4) struck out two in the ninth. Brett Jackson doubled with one out, but was caught trying to steal third.

The NL Central-leading Reds took three out of four from the Cubs and finished a 5-2 homestand. Cincinnati made 10 errors in those seven games, leading to seven unearned runs.

The Reds went into Sunday tied for second in the NL in fielding, and the sloppy glovework left manager Dusty Baker less than giddy about the win.

“Is there stink on the field?” wondered Baker, who said he spoke with his team about tightening up the defense while the Reds were in Chicago a week ago. “It was an ugly win, but a win’s a win. We’ve got to tighten up the defense. That’s one thing we pride ourselves in. We’ve just got to keep working. It’s a matter of concentration. We’ve got to go back to total concentration.”

Jay Bruce dropped Luis Valbuena’s fly ball near the right-field warning track with one out in the eighth inning, allowing David DeJesus to go from first to third. DeJesus scored on Soriano’s groundout.

The Cubs’ comeback allowed Chris Volstad to avoid the loss, but his streak of consecutive starts without a win was stretched to 24, dating to July 17, 2011, when he was pitching for the Marlins. He allowed seven hits and four runs in six innings.

“I was spotty here and there,” Latos said. “I didn’t have control of my fastball or command of my curveball or slider. I got by with what I had.”

Cincinnati took a 1-0 lead in the first on Bruce’s two-out single. He is batting .406 (13 for 32) during an eight-game hitting streak, which started immediately after he got two days off.

The Cubs tied it in the third on Scott Clevenger’s leadoff walk, Volstad’s sacrifice and DeJesus’ ground-rule double.

Consecutive singles by Bruce, Todd Frazier and Valdez to lead off the fourth produced the go-ahead run. Hanigan’s sacrifice fly and Latos’ RBI single made it 4-1.

Volstad was hurt as much by bad luck as anything, Cubs manager Dale Sveum said.

“It started with a cueball by Bruce and a (lunging) single that found a hole by Frazier,” Sveum said. “Then he threw a bad pitch to Valdez and got lazy with the pitcher.”

“There was no reason for the pitcher to get a hit there,” Volstad said.

NOTES: This was the 13th sellout of the season, a single-season record at 10-year-old Great American Ball Park. The previous record of 12 was set last season. … The Cubs optioned LHP Brooks Raley to Triple-A Iowa, the day after he earned his first big league win. … The Reds optioned RHP Todd Redmond to Triple-A Louisville, the day after he got the loss in his major league debut. … LHP Chris Rusin will be recalled from Iowa to start for Chicago at Milwaukee on Tuesday. It will be Rusin’s major league debut. … The Cubs claimed LHP Alex Hinshaw off waivers from San Diego. To make room, Chicago transferred RHP Arodys Vizcaino to the 60-day disabled list. Hinshaw was 1-1 with a 4.50 ERA in 31 relief appearances. He had been out of the majors since 2009 before returning this year. The Padres designated him for assignment on Aug. 14.

COLUMBUS (AP) — It’s a fresh start for Ohio State. As it turns out, a lot of the players expected... read more