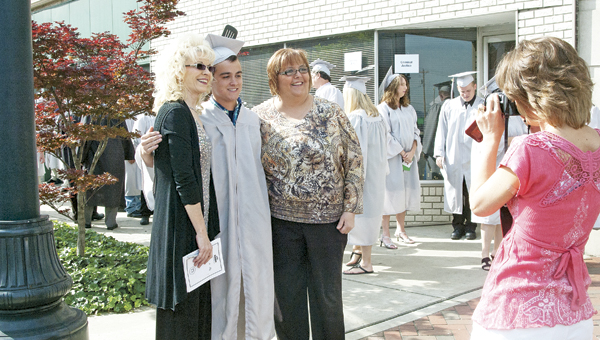 ACTC graduate Cory Boggs is flanked by his instructors Saturday as his mom, Angie Boggs, snaps a photo. The teachers are, from left, Peggy Bradley and Barbara Dunn. Boggs, of Catlettsburg, Ky., was one of more than 500 graduates who received degrees during commencement exercises at the Paramount Arts Center.

ASHLAND, Ky. — Cory Boggs, of Catlettsburg, Ky., made sure everyone knew what kind of diploma he was getting Saturday. As he stood on the sidewalk waiting with the other graduates, a black spatula and spoon he had attached to his mortarboard was there for all to see.

A record number of students — 554 — received diplomas Saturday during the Ashland Community and Technical College commencement ceremonies at the Paramount Arts Center. Thirty Lawrence Countians were among the graduates

The students were August 2011 graduates, December 2011 graduates and May 2012 graduation candidates, and many had earned more than one degree, diploma or certificate.

The speaker for the commencement was Dr. Gregory D. Adkins, ACTC president and chief executive officer. He congratulated the graduates for their achievement and he congratulated the spouses, parents and friends who had encouraged those graduates during their college journey. He also thanked the community for its support of the school. Adkins will retire at the end of June.

“I will reflect upon ACTC and the Tri-State as a high point in my 45 years in education, “ Adkins said.