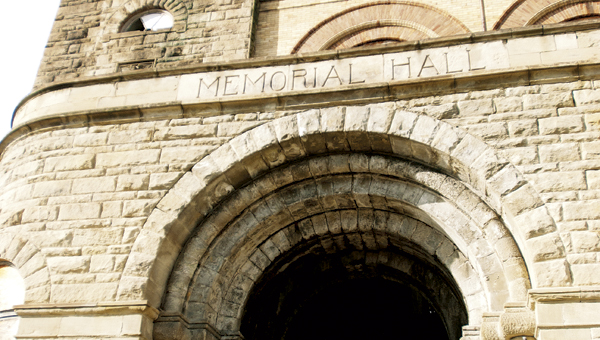 An aging Ironton landmark threatened with an uncertain future could get a new owner and a new use as the county commission considers taking over the historic Memorial Hall.

Recently, Mayor Rich Blankenship approached the commissioners about the possibility of the city transferring ownership of the building to the county.

The structure, built in 1892 as a memorial to the Grand Army of the Republic, once housed Ironton’s city hall and city jail before it was abandoned.

Right now the city of Ironton owns the more than 100-year-old building that community groups, including the American Legion Post 433, a few years ago campaigned to rescue. However, after about a couple of years of fundraising attempts, the legion gave up its efforts.

“We are in the preliminary stages of planning,” Commission President Les Boggs said. “The taxpayers’ money, we believe, must be spent wisely and efficiently, looking at all options for the Memorial building.”

Restoring the structure came under fire this past June when E.L. Robinson, the city’s engineering consultant, recommended that it be torn down because the firm estimated the cost of restoration at almost $8 million. To raze it would be about a quarter of a million dollars, the firm said.

“It is our recommendation that the city demolish the building, so that further deterioration does not add to the risk of the building collapsing on the city streets and possibly causing a very serious accident or fatality,” the report said.

Among the problems cited in the report were crevices around the building’s masonry that could allow water to get into the interior and exterior masonry walls. That could potentially freeze and cause structural damage. There was also water damage inside the building.

Possible restoration by the county would be contingent on getting outside funding, Boggs said.

“We cannot conclude with any specificity any final decision until we see what tax credits we can receive from the state and federal governments,” he said.

Boggs also said he did not know if the mayor would have to bring the matter before Ironton City Council for its approval before any ownership transfer could occur.

A possible use for the building would be to house a consolidation of the county’s emergency operations, including the 911 dispatchers, the emergency medical service and emergency management agency administrative offices and a newly established office for the county coroner.

“We know it would be nice to have those into one building because the current buildings are decaying,” Boggs said. “We also know from our studies from the square footage, it would cost a lot of money. But if we are able to get some help, we may be able to restore it at a significantly lower cost than to build a new building. Maybe even a million and a half less than what would be anticipated to build a new one.”

The county applied in 2011 for a $1 million Homeland Security grant with the intent of building an emergency operations center. However, there were only 14 of those grants given out across the country and the county did not get approval.

But there are other sources of funding that could put new life into Memorial Hall, including Community Development Block Grant money and a smaller Homeland Security grant, Commissioner Bill Pratt said.

“We are trying to get historical money through the preservation of the building and that would mean 35 cents on the dollar,” Pratt said. “If it cost $3.1 million, we would get about $1.1 million. I think the Memorial Hall should be preserved because it has a significance in Ironton.”

According to Shawn Walker, the architect the county called in as a consultant, there is about a two-year window where restoration is possible, the commissioner said.

“The mortar that holds the block and sandstone together, the longer that sits there without being restored, the less chance we have to save it,” Pratt said.

Judge advises defendant of maximum life prison sentence A South Point man who was told he may face up to... read more