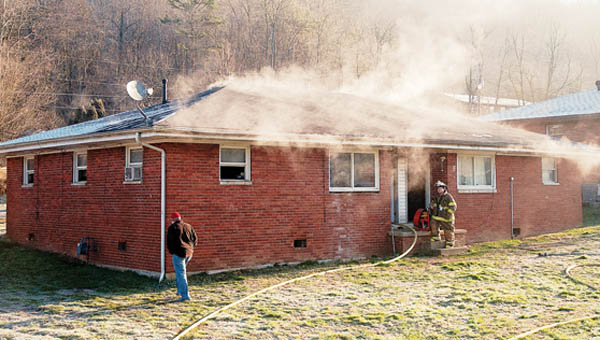 A volunteer firefighter is seen outside a home located on County Road 15 in Fayette Township following a structure fire Wednesday morning.

BURLINGTON — There were no injuries in an early morning apartment fire that damaged one side of a duplex building in Burlington Tuesday.

Chesapeake Volunteer Fire Department chief Ed Webb said a mother and her two children lived in the duplex on County Road 15, also known as Buffalo Creek Road, but were not home at the time.

“Crews went in and found the fire in the kitchen area,” said Chief Carl Kleinman of the Burlington-Fayette No. 2 Volunteer Fire Department.

Kleinman said the call came in about 8:10 a.m. When crews arrived at the scene they found the fire near the stove and contained it to the kitchen. There was smoke and water damage to the other side of the duplex.

Crews from Chesapeake, Burlington, South Point and Proctorville VFDs responded to the fire and were on the scene until about 10:45 a.m.

Kleinman said it was likely the family in the neighboring unit called 911. The unit with the fire did have a smoke detector and the American Red Cross was called.