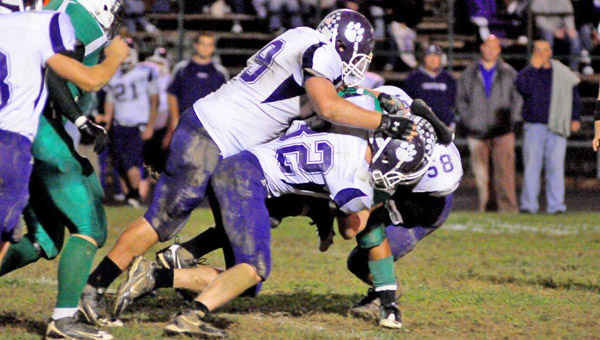 CHESAPEAKE — Coach Andy Clark isn’t laid back at all this week, but he does want to slow things down.

Actually, the only thing Clark wants to slow down is the explosive offense of the St. Clairsville Red Devils.

“They’re pretty impressive,” said Clark who has guided the Panthers to the playoffs in his first season as a head coach.

“They’re pretty athletic. They’re going to make some plays. We just have to slow them down and limit their big plays.”

Kinnick also has 434 yards rushing on 95 carries and three TDs.

“He has an accurate arm. He doesn’t miss,” said Clark. “He can run the ball well, too, but he basically reads the defense and he knows how to find the hot receiver. They run every offensive set there is.”

Running back Jaylon Brown leads the team with 769 yards on 74 carries and he has scored 10 touchdowns, but he suffered a broken collarbone in last week’s win over Union Local and is lost for the playoffs.

Senior Ben Evick (5-7, 155) will take over the running back position after playing as a receiver most of the season. Evick has 149 yards on 45 carries and three TDs to go with 16 receptions for 223 yards and a score.

The Red Devils have a plethora of receivers that includes Evick. Jerrid Marhefka has 27 catches for 658 yards and eight scores, Daniel Monteroso has 18 receptions for 380 yards and six TDs after being injured part of the season, Chase Garan has 14 grabs for 295 yards and two scores, and Michael Ferns has 13 catches for 199 yards while rushing 24 times for 373 yards and four touchdowns.

“It’s hard to focus on just one or two guys,” said Clark.

The Panthers (7-3) can slow the offense by getting sustained drives against the Red Devils’ defense.

“We’ve got to establish the run and just hide the ball from them,” said Clark.

St. Clairsville’s defense runs a 4-4 look but will switch to a 50 look and even a seven diamond.