It’s the race that many political observers in the county say is one of the most important on the Nov. 2 ballot.

When Democrat Stephen Dale Burcham faces off against Republican Jason Stephens for the Lawrence County auditor’s post, it could bring a host of changes at the first of the year. If the Democrat Burcham wins, that party will increase to five its presence in the courthouse after the Democratic Central Committee picks Burcham’s successor as treasurer.

If Stephens wins, the balance of power on the county commission will stay the same. But there will be a new face on that governing body.

Last week both candidates sat down with The Tribune to talk about what they can bring to the job, why they are in politics and what county government means to them.

Right now Burcham, a Proctorville native, is on his second term as county treasurer. The auditor’s race will be the third time the CPA, who owns an accounting firm in Huntington, W.Va., has run for office. 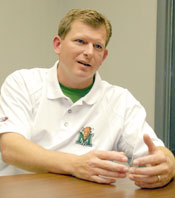 “One of the things that first intrigued me about politics was the ability to help my fellow Lawrence Countians,” he said. “I have always felt government should be accessible and transparent to the taxpayers and voting public.

“I don’t see much difference (between working in public or private sector). When I operated my practice as a CPA, I took the same approach and tried to help people with the federal government and Internal Revenue Service. Many times, government gets to be the big oppressive machine. The average Joe doesn’t know how to provide the information to and from those entities.” 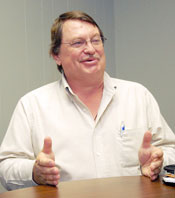 Stephens, originally from Getaway, got interested in politics when he was a senior at Lipscomb University in Nashville and the former President George W. Bush came to campaign for re-election.

“They needed drivers for the motorcade and I got to drive one of the vehicles that drove the press corps around,” he said. “That was my first real taste of politics, to be interested in what happened from there.”

Both men are staunch supporters of their party and express great pride in their affiliation.

“Generally speaking the Democratic Party stands for the working men and women of the county,” Burcham said about why he is a Democrat.

On the local level, Stephens, who in 2000 became the county’s youngest commissioner, says voters look to the individual more often than the party.

“I find knocking on doors a lot of people vote for the person more than they do the party in a local election,” he said. “In the national scene there is a lot of discontentment with the Obama Administration … that will filter down to the local elections. … I am a Republican and proud to be a Republican. I believe in conservative fiscal principles. Smaller government is better and being accountable to the people.

“I will speak to a lot of high school students and (county government) is really the level of government where the rubber meets the road, where the policies of the state are implemented. … The county government has to operate within the rules established by the state government. That is the challenge of county office holders to meet those standards.

“To work within the rules and be creative and try to only spend what we have. … I am proud we have been able to have balanced the budget. It’s a result of a lot of changes that have taken place. We have been able to maintain and in some places expand service to the local people.”

In the six years Burcham has been treasurer he has changed how Lawrence Countians can pay their property taxes, setting up an arrangement with banks for customers to pay their taxes there, allowing monthly payments and paying by credit card.

As auditor Burcham sees fiscal transparency as his first priority.

“Immediately I would have all the checks, cash receipts and financial statements on the auditor’s Web site so that any citizen of the county could review them at their convenience day or night,” he said. “In times of financial difficulty, it is important to know where checks are being written to. … Now you have to come into the courthouse to ascertain that.”

Burcham also wants to look at the ongoing property re-evaluation being conducted by the auditor’s office that is mandated by the state.

“When the economy is in a tough spot like now, I don’t think anyone’s taxes should be going up,” he said. “People aren’t getting a cost of living increase. One of the ways of doing that is a rollback or eliminate some of the proposed assessment increases.”

He also wants to switch the county from its current cash basis financial reporting to the general accepted accounting principles for governmental entities.

“The county is fined by the state of Ohio for not preparing their financial statements in accordance to the auditor of state’s requirement,” he said.

That fine is $750, according to Chris Kline, deputy auditor.

Stephens commends the current auditor’s staff for maintaining records and wants to be proactive in communicating with local officials and the public.

“I want to meet with school treasurers to make sure they are getting everything they need,” he said. “Next year is going to be a real challenge with the state budget facing a $8 billion deficit. That money is going to be cut somewhere. That is where I think my background as county commissioner will be beneficial in the auditor’s office. … I am part of all the communities in the county. I know what the people in Rome face versus the people in Perry Township. Our county is diverse and different. Having that understanding and trying to serve, that is what I would like to bring to the auditor’s office.”